Paul was 59 when he came to Drewberry with a number of different pensions — two final salary and three money purchase schemes — in tow.

The pension freedoms had just been introduced, and Paul was interested in seeing how he could take advantage of them to improve his retirement prospects.

Struggling to Find a Suitable Adviser…

“I started looking for some help on Unbiased, but had no success with three or four potential advisers,” recalls Paul. “One of my defined contribution schemes from Clerical Medical was complicated as it contained guarantees, which meant the scheme itself wouldn’t entertain a transfer unless I sought advice. However, many of the advisers I spoke to weren’t sure where to start with it!”

It was then Paul came across Drewberry and Neil, who specialises in the type of pension Paul had from Clerical Medical.

Speaking to Neil Adams at Drewberry

“Neil was clear in his understanding and open and honest from the start. With the other advisers I tried, a couple flat out didn’t phone me back, while others had larger fees or didn’t adequately explain their fee structure to me. That wasn’t the case with Neil – everything was clear from the outset.”

Paul agreed. “The guaranteed regular income coming in from my final salary pensions is perfect for me, as it’s enough so I don’t need to worry about using my other assets to pay the bills.”

With the three defined contribution schemes, Neil worked to get them all consolidated into a single arrangement – including that tricky Clerical Medical scheme.

Paul’s new consolidated pension scheme was under Old Mutual, where Neil could provide oversight and from which pension drawdown was possible when Paul stopped working.

After Paul appointed me, I got to work looking at both his defined benefit and defined contribution schemes, weighing up the pros and cons of transferring them. In the end, it seemed like the final salary schemes were best left where they were to provide Paul with a secure income in retirement.

Paul’s got peace of mind…

Now 61, former IT project manager Paul has retired and has taken advice from Neil on how to draw down a small amount from his new consolidated pension pot for maximum tax efficiency. 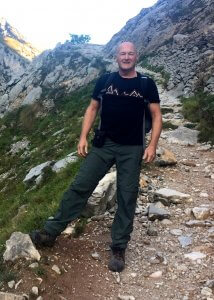 “Between my savings, final salary schemes and drawdown fund I’m really happy with the mix of income I have now. I feel well-diversified,” says Paul, who is also using Drewberry’s ongoing service to manage his assets going forward. “I’d much rather have someone looking over my financial situation than manage it myself.

“Previously I’d get pension statements year by year and I’d look at them and think everything seemed to be going along nicely, but I’m not an expert. Managing your finances yourself takes a lot of time and effort and there are better things to do in retirement than be a bean counter!”

“While I’d done some fund switches myself in the past and they seemed to have done okay, that was more luck than judgement! After I spoke to Neil, I actually found out that some of the choices I’d made put me in a higher risk category than I ideally wanted to be in, so it was really valuable to do that risk assessment as part of my review.”

Drewberry Listened to Who I Was

“Overall, I’m glad I found Drewberry,” says Paul. “I’ve been able to get all my pensions sorted, letting me retire before state pension age, which is great for me. Plus, Neil has put together a tax-efficient model for drawing down my pension so I don’t pay more tax than I have to.”

“Neil was able to explain quite complex things in ways I could understand and seemed to have a genuine interest in what I wanted. I didn’t want someone who was going to oversell to me – with Neil, I found someone who would listen to the kind of person I was.”

Our purpose is simple: Improve your financial wellbeing. We use technology to bring your financial future to life and provide a visual plan of where you are today, where you want to go and what's necessary to achieve this.

How much will your pension be worth when you retire? Use our Pension Calculator to work it out and get a free copy of our Guide to a Richer Retirement.

When will your income drawdown pension run out? Enter the anticipated size of your pension pot at retirement and follow these easy steps to calculate how long your pension will last.

Find out how much your final salary pension might be worth in today's money if you considered accepting a cash equivalent transfer value from your scheme.

What is the Best SIPP 2020?
Looking for the best UK Self Invested Personal Pension (SIPP)? Read our 2020 guide, find out which are the UK's best SIPPs and their charges and use our pension calculator to see how much you could be saving for your retirement....
Contact Us
LondonBrighton
Head Office & Pensions and Investments
Millennium Bridge House
2 Lambeth Hill
London
EC4V 4GG
0208 432 7333
help@drewberry.co.uk
Personal Insurance & Accounts Payable
Telecom House
125-135 Preston Road
Brighton
BN1 6AF
01273 646484
help@drewberry.co.uk
Our Core Principles