The taxation of flexi-access drawdown is the most complicated part of drawing your retirement savings in this way. There’s no easy answer regarding the question of how much tax you’ll pay with pension drawdown because it depends on your circumstances.

Broadly speaking, there are four major factors affecting how your pension is taxed in income drawdown:

How Do I Access My Pension Through Income Drawdown?

You have three main options for taking cash out of your pension via income drawdown, all of which will have an impact on the amount of tax you’ll pay.

How Much Tax Will I Pay if I Move My Entire Pension into Drawdown?

If you decide to designate your whole pension to flexi-access drawdown in a single tax year, the first 25% of your pension will be available as tax-free cash, so £25,000 of a £100,000 pension pot. This is known as a pension commencement lump sum.

The remaining 75% of your pension pot, £75,000 in this instance, will be moved to a drawdown fund and taxed as income as and when you take it (assuming your total income exceeds your personal allowance in any given tax year). 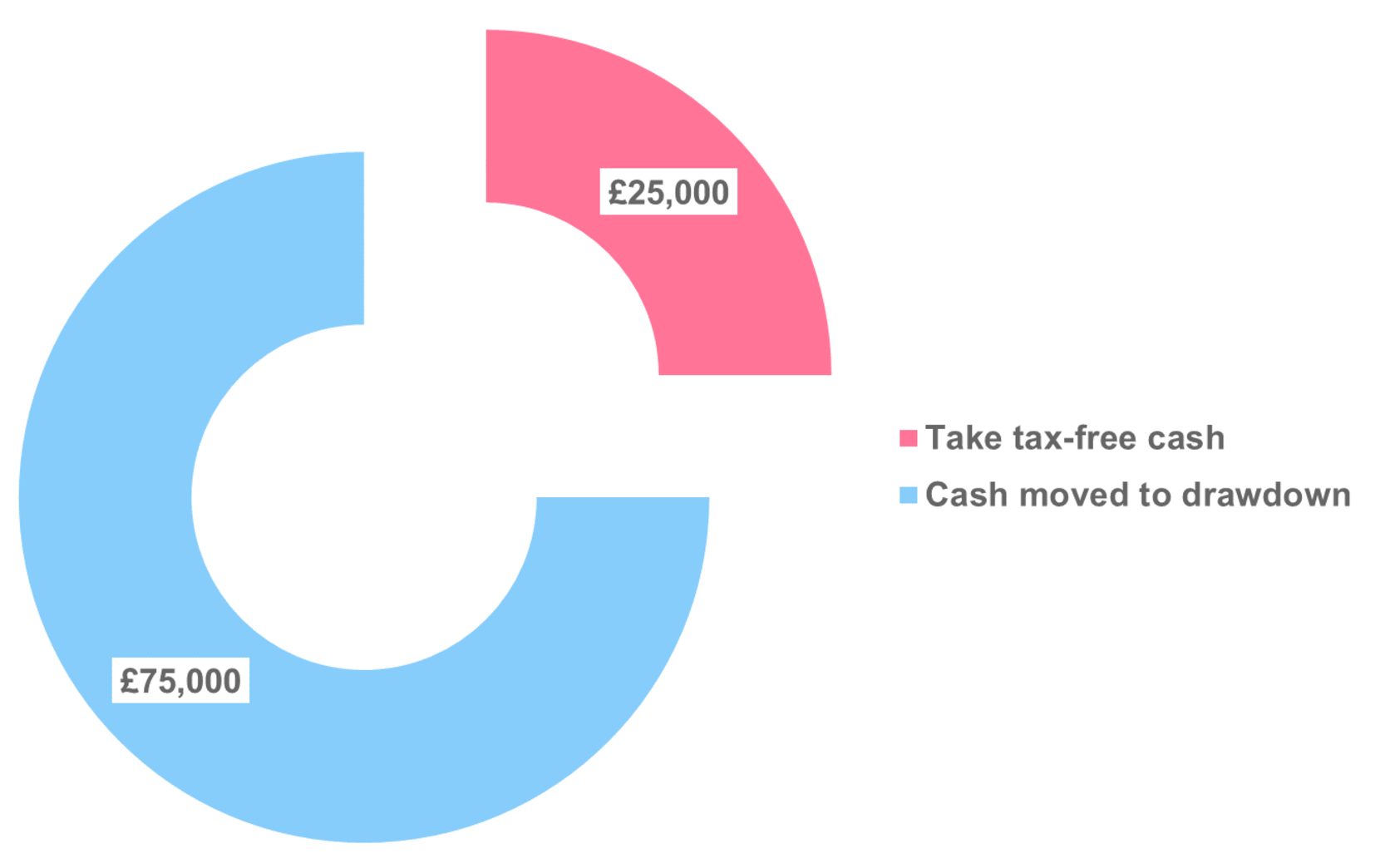 Once the 75% of your pension is in flexi-access drawdown you can take cash lump sums out of your pension or invest it to provide an income. You can also use a mixture of the two.

In this instance, further withdrawals from your drawdown fund will be added to the rest of your earnings that tax year — including the State Pension — and taxed as income accordingly if it’s above the income tax personal allowance.

However, once that 75% is in a compatible drawdown arrangement, you don’t have to touch it straight away — you can leave it invested and take an income from it as required.

When you need to take an income, your withdrawal will be added to your other income that tax year and, if you’ve drawn a greater amount than your income tax personal allowance, you’ll pay tax on that drawdown income.

How is Phased Income Drawdown Taxed?

Each time you designate a chunk of cash to drawdown, the first 25% is tax-free. The cash you leave behind stays invested with your pension provider.

But Brenda only needs some of that available tax-free cash today – in the example below she wants £10,000, or 10% of her total fund value.

Remember that whenever you take tax-free cash from your pension, it comes with a non-negotiable taxable element along with it worth three times the tax-free cash. This element is designated to pension drawdown.

Of this, Brenda would receive £10,000 as tax-free pension cash, 25% of the total amount (£40,000) drawn down from her whole pension pot. The £30,000 moved to pension drawdown will be added to her total income in the tax year she chooses to take it and, if she exceeds her personal allowance, she’ll be charged income tax on withdrawals from the drawdown fund.

After accessing £40,000 of her pension, Brenda has £60,000 still invested. Of this amount, 25% is available tax-free and the remainder (i.e. £45,000 plus investment growth) will be potentially taxable income when she chooses to take it. 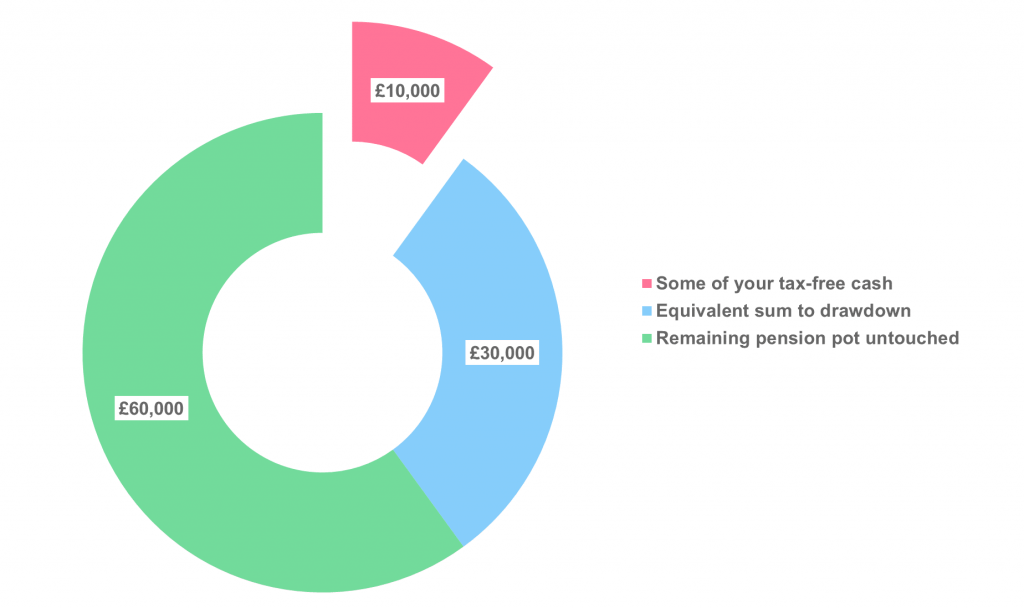 Important!
For simplicity, this chart assumes no investment changes to Brenda’s pension. This is very unlikely given that a sizeable proportion of her fund will remain invested, so it’s important to consider that the value of Brenda’s retirement savings could go down as well up in line with markets.

Can I Take Small Tax-Free Lump Sums from My Pension?

Yes — you can take small tax-free lump sums from your pension with gradual income drawdown, assuming your pension arrangement permits it.

For each tax-free lump sum you take you must also allocate a non-negotiable amount to drawdown worth three times the amount you get tax-free. So if you wanted to withdraw £5,000 of tax-free cash, you’d also have to allocate £15,000 of taxable cash to your drawdown fund. Remember, that £15,000 will potentially be taxable as income when you need to take it.

In this example, £20,000 has been designated from your pension to drawdown, of which £15,000 remains invested.

Should I Move My Pension to Drawdown Gradually?

Those with the largest pension funds will typically benefit the most from gradually moving their pension pot to drawdown. This is because the tax-free cash element, when withdrawn, will form part of your estate for inheritance tax purposes.

If you have a £1 million pension pot and opt to withdraw your entire pension using income drawdown, the 25% tax-free cash element would be worth £250,000 and become part of your estate. When added to your other assets, such as your home, it’s clear to see that this could easily breach the inheritance tax nil-rate band threshold of £325,000 per individual.

Pension Drawdown and the Lifetime Allowance

When you move cash to drawdown, you crystallise part of your pension pot (known as a benefit crystallisation event). So if you move your whole pension to drawdown at once you crystallise the entire pot. Those with a large pension could then be hit with the lifetime allowance charge as soon as they access their pension.

Uncrystallised funds pension lump sums (UFPLS), which are also referred to as FLUMPs, offer a very similar way of taking your pension to drawdown. However, you don’t have to designate funds as in drawdown – you simply withdraw cash straight from your pension pot.

25% of this sum – £2,500 – will be free from tax. The remaining £7,500 will be added to any other income Alan has that year and may therefore incur income tax depending on his other earnings.

Alan is left with £90,000 in his pension pot which he can withdraw at a later date. 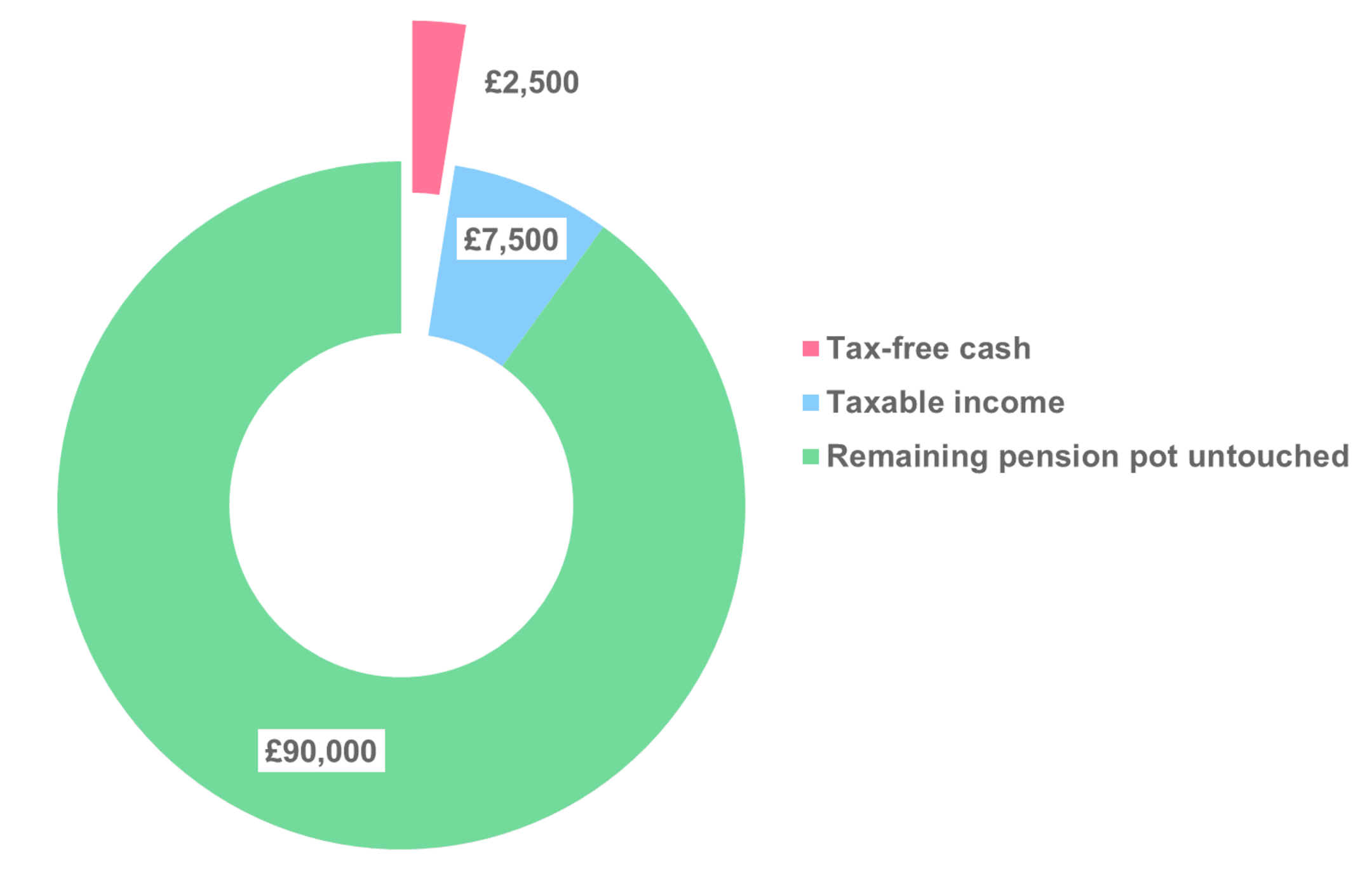 Important!
For simplicity, this example assumes no investment changes to Alan’s pension. This is very unlikely given that a sizeable proportion of his fund will remain invested, so it’s important to consider that the value of Alan’s retirement savings could go up as well down in line with markets.

Is Tax Due on an Inherited Pension?

Following the pension freedoms introduced in April 2015, the government ditched the ‘death tax’ on pension pots. Previously, any money left to loved ones in a pension pot would be subject to a 55% charge.

This has now been abolished and most people can leave their pensions to their loved ones without having to pay inheritance tax as well. The key is that the cash must remain within a pension wrapper to be free from inheritance tax, i.e. still invested in a pension pot or designated to a drawdown fund.

If you’ve withdrawn chunks of your pension and are holding it elsewhere, such as in an ISA, this could be added to your estate for inheritance tax purposes after you’re gone.

If you die before the age of 75, there’s also no income tax for your loved ones to pay on a defined contribution or money purchase pension you’ve left them. However, if you die after the age of 75 your beneficiaries will have to pay income tax at their highest marginal rate on any withdrawals they make from an inherited pension.

Another important consideration is that this only applies to defined contribution or money purchase pension pots. Final salary schemes will often offer a reduced survivor’s pension for your spouse and perhaps any dependent children.

However, any income from your final salary scheme paid to your loved ones after you’re gone will be added to their earnings that tax year and will be taxed as income accordingly.

Do You Need Some Help?

Our purpose is simple: Improve Your Financial Wellbeing.

We use clever technology to bring your financial future to life 🤓

What is the Best SIPP 2020?
Looking for the best UK Self Invested Personal Pension (SIPP)? Read our 2020 guide, find out which are the UK's best SIPPs and their charges and use our pension calculator to see how much you could be saving for your retirement....

What's a Good Pension Pot at 55?
Read our 2020 Good Pension Pot Guide to find out how much you need in your pension to have a comfortable retirement. Use our pension calculator to see how much you will have saved by age 55 and what this will mean in terms of a retirement income...
Contact Us
LondonBrighton
Head Office & Pensions and Investments
Senator House
85 Queen Victoria Street
London
EC4V 4AB
0208 432 7333
help@drewberry.co.uk
Personal Insurance & Accounts Payable
Telecom House
125-135 Preston Road
Brighton
BN1 6AF
01273 646484
help@drewberry.co.uk
Our Core Principles
Cookie Use